WHAT IS… GLOBAL SHUTTER? 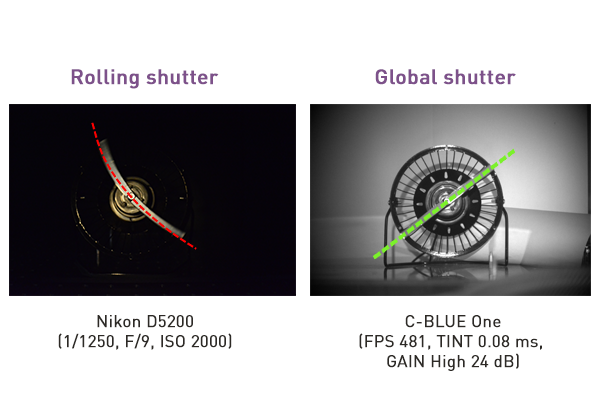 A short introduction to global shutter

C-BLUE One (formerly C-MORE) is a high performance scientific CMOS camera. The 1608×1104 pixels sensor can be run at 662 FPS in full frame. To ensure the lowest latency, the camera uses CoaXPress 2.0 cables. A key feature of the camera to enable artefact-free acquisitions in dynamic imaging is the global shutter mode.

For a CMOS sensor, there are two ways to acquire an image:

1. Rolling shutter. The acquisition is made one line after the other, the sensor reads each line of the array sequentially. Pixels are exposed with a temporal shift from one pixel to the next.

2. Global shutter. The full array is exposed entirely at once. All the pixels begin and end the exposure simultaneously. At the end of exposure, the image is transferred to the memory. Then, the image is read-out while the next one is being exposed.

The acquisition mode is an intrinsic characteristic of the camera. However, it is important to understand the differences that will occur in an experimental context when using a camera with rolling or global shutter.
Global shutter is highly advantageous for dynamic imaging applications. Let’s see why.

Artefact free. In rolling shutter when the image readout speed cannot match the object’s motion, there is temporal under sampling. A spatial distortion of the moving object, often  referred to as the ‘rolling shutter effect’ appears. The larger the object and the faster the movement, the worst is the distortion. Additionally, as the sensor gets larger and with a higher resolution, the readout of the sensor will take longer, hence, the distortion will get worse. This artefact is different from motion blur which occurs in both global and rolling shutter when the integration time is too long compared to the object’s speed.

Temporal correlation. Even in the absence of distortion the top and the bottom of an image acquired in rolling shutter will not be captured at the exact same time point. Different regions of the image are not correlated in time to other regions. Whereas with global shutter, all pixels are exposed at the same time, allowing for accurate temporal correlation of different areas of the sensor.

Simpler and faster synchronization. Synchronizing a rolling shutter camera to other components, such as a light source, can be difficult due to the time delay between the lines of the sensor. This may result in slower cycle times and frame rates relatively to those achievable in global shutter.

Why is C-BLUE One a game changer?

By combining a global shutter and high framerates (up to 662 FPS in full frame) to very low noise, C-BLUE One opens new perspectives for applications that simultaneously require truthful/deformation-free images, high temporal resolution, and high sensitivity.

You can find out more about the cookies we are using or switch them off in settings.

This website uses cookies so that we can provide you with the best user experience possible. Cookie information is stored in your browser and performs functions such as recognising you when you return to our website and helping our team to understand which sections of the website you find most interesting and useful.

Strictly Necessary Cookie should be enabled at all times so that we can save your preferences for cookie settings.

If you disable this cookie, we will not be able to save your preferences. This means that every time you visit this website you will need to enable or disable cookies again.

Please enable Strictly Necessary Cookies first so that we can save your preferences!